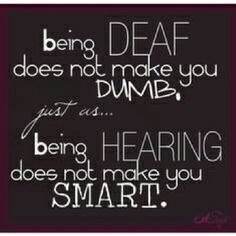 I’ve been working on a pretty exciting project this week. It’s mainstream with an enormous audience and its main focus is all about demonstrating that deaf people can do anything.

It’s an idea that’s been around for a while and that I thought was starting to get a bit old hat. Of course deaf people can do anything! We are already breaking barriers, challenging perceptions and working in the mainstream arts.

But upon returning home I came across perhaps the most prejudiced man I have ever met.

I’ve seen this man quite often over the past year but he’s never spoken. His wife also kept herself to herself and I began to think maybe they were just the quiet type…

But then, certain circumstances meant we crossed paths and the bloke reluctantly and with many pauses approached me.

It turned out he had avoided speaking for the past year as he had noticed I was deaf and then – to add insult to injury – stated that he felt sorry for me as I must have lots of problems.

Even with my polite but firm response he went on to add how deaf people with hearing children must struggle with parenting skills and that the children must run riot because of our inability to hear.

Every word that came out of this mans mouth was seeped in prejudice, assumption and ignorance.

I informed him that as he had never encountered deafness before and had certainly not got to know me, he had a completely wrong idea of what life was like for me and my family.

He mentioned other prejudiced concepts such as how people never get married before children nowadays, which – in his eyes – is the ‘wrong way round’ and I realised that whatever I said to this man would have no chance of entering his closed mind and therefore there was no point in wasting my time arguing.

I concluded by telling him how I felt his views and behaviours were actually very sad and although I was outraged, shocked and hurt, I held my head high and walked off – dignity intact.

Even now I still can’t believe that these views actually still exist when deafness, disability and uniqueness are more widely seen.

That was my downfall though – assuming that things had changed enough for differences to be understood and for prejudice to dissolve altogether.

This man certainly would never believe what I’ve done with my life, what I do, and with an attitude like his he will never know.

So that was an enormous lesson learnt for me – the projects that aim to banish misconceptions and show deafness in a positive light are absolutely necessary and very much appropriate.

And just in case you didn’t know – deaf people can do anything. Just let us show you 😉