I’ve been attending the festival Deaffest at Wolverhampton for many years now. This year was its 12th festival and boy has it come a long way since it first launched.

Based on the theme “Discovery” this years festival promised to showcase undiscovered talent from around the globe and it brought over several high profile performers to do just that.

The MC for both Friday’s opening night and Saturday’s awards ceremony was New York based ASL artist Douglas Ridloff. Charismatic and cheeky, he charmed the audience with his fluid International signs, assisted with both a BSL and American Sign Language interpreter on stage.

USA rap artist Sean Forbes and his band also performed on both nights and when I wasn’t squealing like a teenage fan I really appreciated being seeing first hand how he fuses ASL/PSE (their version of SSE) with music and lyric videos. It’s unique, brashy and bold.

Attendees were also able to meet Sean Berdy from the hit American series Switched at Birth and be wooed over by his successful attempt to fingerspell his name in BSL (go Sean!)

The audience were also treated to more British talent with performances by dancer Chris Fonseca, sign singer Colin Thomson and a Cirque VV show by Steve Webb and David Sands.

They were all varied performances in style and pace, with literally something for everyone. But rather than have the same acts on both nights I think it would have been more effective to have different acts (and different jokes) per night as I had a slight case of Deja Vu on the Saturday… didn’t I see you guys yesterday??

All in all it was a jam packed programme, highly exciting yet a little haphazard when it came to the smooth running of the evening programmes. Highly surprising considering the amount of people involved!

Anyhow, while Deaffest began as primarily just a film festival it appears to now be much more inclusive of other arts; with VV, comedy and drama workshops, live performances and a sign karaoke too all taking place over the weekend. For only £2 entry during the day you certainly do get a lot for your money!

Saying that, I do feel that by showing films and holding talks/workshops simultaneously throughout the Saturday, it leaves attendees with a difficult choice regarding how to spend their time.

It meant that when the winners were revealed during the awards ceremony, there were a few winning films that I had not even seen.

The festival definitely drew in a great crowd for the whole weekend  and another highlight for me was Birmingham  based illusionist / magic artist iNfInItY who treated us to some tricks as he weaved his way in and out of the crowds. He dumbfounded us when he took a 20p coin from my husband, rubbed it and bent it before our very eyes! Sheer entertainment indeed.

Attendees were also introduced to Rachel Shenton, a hearing British actress and Deaffest’s patron who has a short film in production that centres around a profoundly deaf girl. Keep your eyes peeled for The Silent Child when it’s released, featuring an authentic young deaf actress. (Hurrah!)

Deaf Funny, written and directed by Limping Chicken’s very own Charlie Swinbourne, also premiered at the festival and is released on BSL Zone this week for your own viewing pleasure!

And without blowing my own trumpet too much, I was fortunate enough to be part of Macbrew, an inclusive piece of theatre based around Shakespeare’s witches from Macbeth. It was a pop up style performance that took place in the venue’s cafe twice on the Saturday and surprised those sipping on their coffees.. Inclusive theatre while you have your lunch – why not?!

The Sunday’s programme was purely film showings and included a subtitled screening of Marvel’s Guardians of the Galaxy Vol 2.

On the whole it was an exuberant weekend and really delivered on its promise to show international talent and demonstrate how collaborations can be formed. But let us not lose sight of the real reason we attend Deaffest; to celebrate our deaf films and nurture the talent that creates these. I’d love to see more opportunities for budding directors, editors and writers as it seems that those onstage seem to (ironically) steal the limelight.

Great job though, Deaffest. You’ve got people talking, facebooking and tweeting about how enjoyable the festival was, even if they’re just swooning over the American stars 😉 anything that brings deaf art together definitely wins my acclaim and that is why I will certainly be returning to see what more delights your festival has on offer for us.

Cue compulsory fan photo! (Me with the legend that is Sean Forbes ☺️) 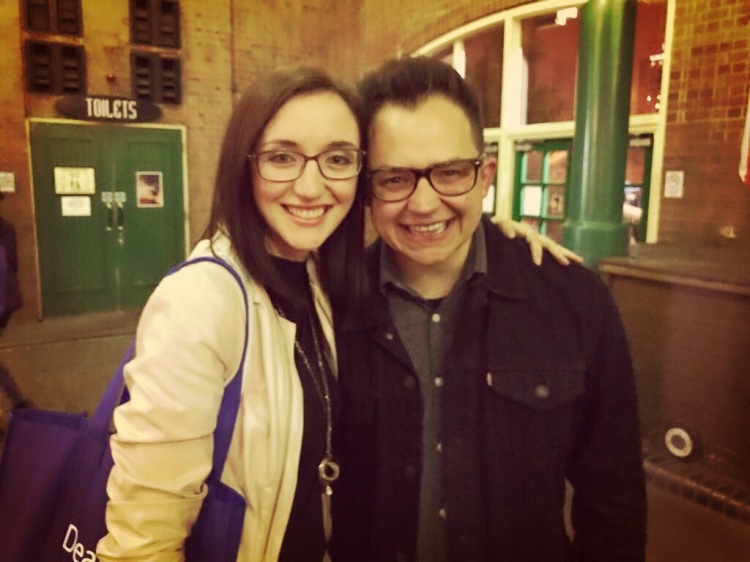